Over 50,000 people a month in the U.S. search the Internet to find out how long alcohol stays in your system. More specifically, they want to know how long alcohol is detectable with a breathalyzer or other test. The answer is that it depends on: What you drank, how long ago you drank it, and your weight. There are a host of secondary factors that may affect these times as well. The most important measure, though, is time.

It was after 11 am on a New Year’s Day. A 21-year-old male was pulled over by law enforcement along a Salt Lake City roadway.

Like many others his age, he had celebrated New Year’s Eve with gusto, then retired for some sleep.

The trouble was, when he set out the next day, all that alcohol wasn’t out of his system yet.

In fact, his breathalyzer test showed a reading of 0.89 blood alcohol content (BAC) – over the legal limit, as reported by the Salt Lake Tribune. He was arrested.

There is also the case of a Fresno, California woman who also received a so-called “day after DUI.”

As reported by ABC, she had been out the night before, downing six drinks between 11 pm and 2:00 am. She did the right thing by using a designated driver to get home and went to sleep as usual.

The next day, while on her way to work, she was pulled over and charged with a DUI. The problem? For her size, those six drinks over three hours left her with a BAC of approximately .22.

The woman reported that she didn’t “feel drunk.” It’s a simple matter of science, though.

Feeling “ok to drive” unfortunately doesn’t always translate into being below the BAC limit, as further illustrates the story of Holly (name changed), told in The Telegraph:

“I was 24 years old. I’d been at a friend’s house party where we’d been drinking all night and into the early hours. In the morning, I had to move my car off the driveway to let someone else get theirs out. It was about 8 am and I’d been asleep for two hours…. I got in the car thinking, ‘It’s only around the corner, I’ll be fine.’ Only, as I moved the car around the corner, I was pulled over by a policeman and breathalysed. It showed I was more than three times over the legal limit… When he said, ‘Do you know why I have pulled you over?’ I said, ‘Because I’m not wearing shoes.’ He laughed, but I genuinely thought that’s what it was.”

According to the New York Times, a million Americans a year are arrested for driving under the influence. These arrests are based on readings from breathalyzer tests. Generally, there is a roadside test first. If the result is .08 or above, this is considered under the influence in all 50 states. A second test is administered again at the police station… and this result is the one typically used by the prosecution.

Let’s get this out of the way up front: It will probably take longer than you think to get that alcohol out of your system

Most people don’t realize how long it takes to metabolize alcohol. In general, it’s one hour per ounce of alcohol consumed.

The only thing that matters is time. Not sleep, coffee, food or shower.

By contrast, it’s much quicker to get drunk than it is to get it out of your system. You can feel the effects of alcohol within minutes. Why? Because it is absorbed rapidly into your bloodstream from your stomach and small intestine. Then, it’s a short ride to your brain and spinal cord, where it affects your nervous system.

Alcohol is a depressant. It alters your perception, your movement, your senses… all bad things when it comes to operating a motor vehicle, with the potential to cause serious harm to yourself or another person.

In fact, there is evidence that even a small concentration of alcohol in your blood can affect you. A 2018 meta-analysis published in the Society for the Study of Addiction’s journal Addiction found impairments lasting into the period of time where people would generally characterize themselves as having a hangover – when their blood alcohol percentage drops to less than .02. Even at that level, you could have problems paying attention, slower reaction times and problems with your memory, both short- and long-term.

You can see why it’s critical to know when alcohol leaves your system – before you get behind the wheel. Let’s put aside everything else for a moment and focus on how much you drank and when you drank it. 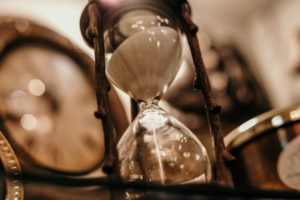 Figuring Out When You’ll Be Sober

Whether you go to a bar or a friend’s house, pour levels can be different.

It’s really not about number of drinks, unless you’re talking about drinking out of a beer can or bottle, both of which come in standard sizes.

It’s amount of alcohol you are consuming that counts.

What is a Standard Drink?

In calculating you alcohol intake, it’s the amount of liquid – and the alcoholic content of that liquid – that matters.

A little over half an ounce (.06), or 14 grams, of alcohol is considered to be one standard drink in the United States. This can generally be found in:

Filling a wine glass or an oversized beer tumbler to the rim can mean you are ingesting two drinks, not one, as you can see from the National Institute on Alcohol Abuse and Alcoholism (NIAAA) graphic below. 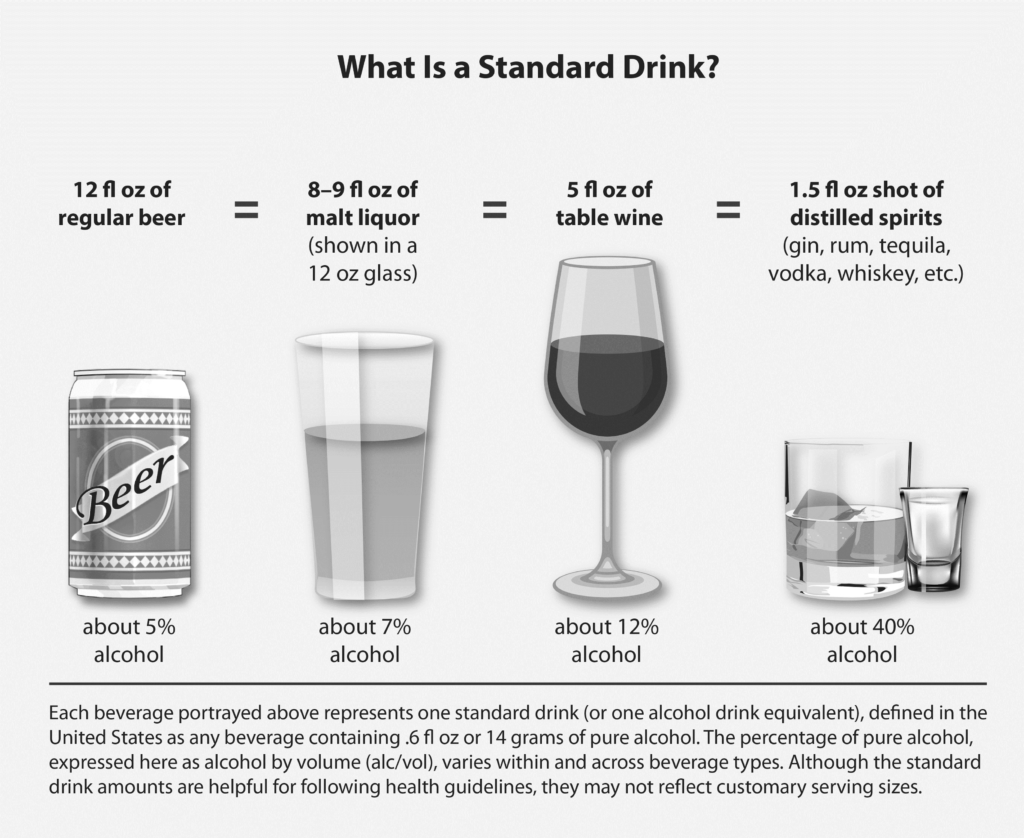 How Long Does it Take to Get a Standard Drink Out of Your System?

Typically people consume more than one alcoholic beverage in a sitting or over the course of an evening.

Think about sharing a bottle of wine with dinner and capping it off with a hard liquor toast. Or, consider a group of friends spending an evening at the local bar.

In either case, more than one drink is typically consumed over a period of time.

To make it easy, here’s a chart that estimates blood alcohol levels based on gender, number of drinks (standard, remember that) and weight, courtesy of the NIAAA. 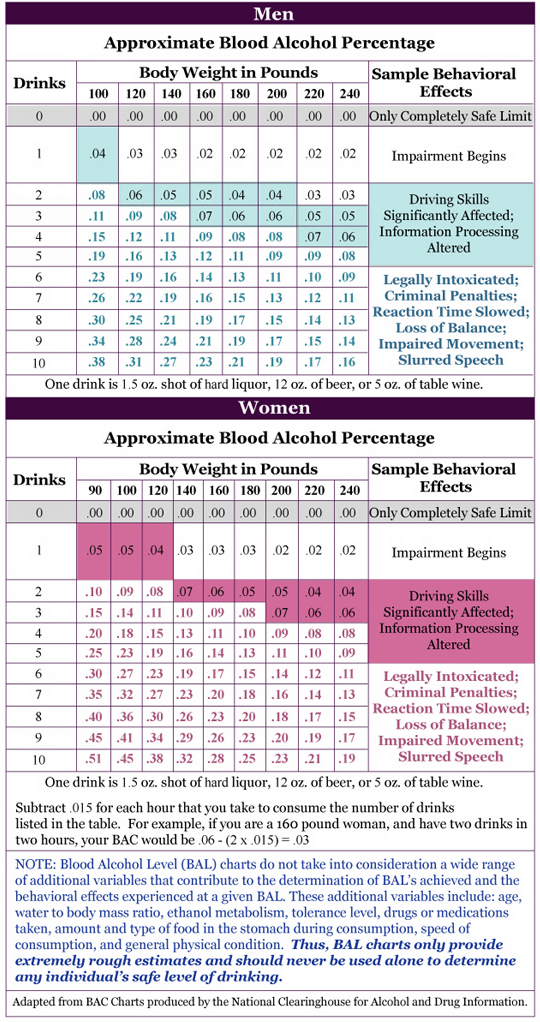 Now, one night of heavy drinking can really do it to you. Considering that it would take 15 hours of abstaining for a blood alcohol percentage of .24 to clear your system, you can see why some people get DUIs the next day.

Once again, your body goes to work on metabolizing that alcohol the moment you start drinking… but it takes a while. Plus, people who continue to drink after their first one continue to add to their blood alcohol content level, more likely a lot faster than they are metabolizing it.

As the chart’s fine print states, you can safely estimate that your blood alcohol level will drop .015 per hour. In the same amount of time, it’s possible to hit dangerous blood alcohol percentage – up to ten times as much or more – if enough alcohol is consumed.

Let’s again use the example of the 180-pound man. He has four drinks in two hours. His blood alcohol level would be .05:

If he doesn’t drink anymore, he most likely will be under the legal limit. However, if he continues to drink, let’s say another two drinks in hour three, his blood alcohol level would be over the limit:

Note that the alcohol level is actually higher than it was to begin with, due to the fact that his body just can’t get rid of it as quickly as it is coming in.

One big caveat here is that there are other, secondary factors at work. These can also impact how long it takes alcohol to leave your system. 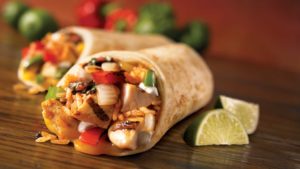 Other Factors Affecting How Long Alcohol Stays in Your System

Of course, nothing is as simple as a short equation when it comes to the human body.

Everyone truly is different; and there are many things to consider when it comes to how quickly your body metabolizes and excretes alcohol.

The more body fat you have, the slower alcohol will leave your system.

Women tend to have alcohol stay in their system longer than men. The theory is that they have more body fat, which slows down the metabolism of alcohol.

Also, even after consuming the same amount of alcohol, women have higher blood alcohol levels than do men. This has been attributed to the fact that women have a smaller amount of water in their bodies, so it takes less alcohol to raise their blood alcohol percentage.

Whether you have food, as well as the type of food, that you have consumed before drinking will  affect how quickly alcohol is eliminated from your system.

In one study, participants eating a meal consisting of protein, carbohydrates and protein before drinking alcohol absorbed the alcohol approximately three times more slowly compared to drinking on an empty stomach.

You may not feel as intoxicated when you eat, but it prolongs the amount of time alcohol stays in your system.

The Health of Your Liver

Since alcohol is metabolized by the liver, any damage to it will affect how quickly you can clear alcohol out of your system.

Chronic alcohol abuse is a slow train to destruction for your liver. It causes alcoholic hepatitis, or long-term inflammation which can lead to scarring, and liver cancer. It also alters the way that the liver metabolizes fat.

Sustained heavy drinking has also been shown to activate CYP2E1 enzyme. It has been theorized that this enzyme transforms acetaminophen (Tylenol) into liver-damaging chemicals – even as little as four to five extra-strength pills, taken over a day.

Medications You Have Taken

If you are on medication, even if it’s an over-the-counter drug, you should always check with your pharmacist before drinking.

The older you are, the more slowly the liver works. This includes a slower ability to clear alcohol from your system.

Yes, your genes play a role in how quickly you metabolize and eliminate alcohol from your system. Genetics is also a factor when it comes to developing alcoholism.

How Long Alcohol is Detectable with Other Tests

While the breathalyzer is probably the most-used test to detect the presence of alcohol, there are others out there. The length of time each one can detect alcohol varies:

How Much Better Can Your Life Be?

If you find yourself asking how long alcohol stays in your system, you may also want to assess whether it is a problem for you. If so, an alcohol rehab can help.

Drinking alcohol could be classified as an alcohol use disorder (alcoholism) if:

Alcohol use disorder can be mild, moderate, or severe, depending on the intensity of its effect on you and your life.

A licensed, qualified addition treatment center can help you break the cycle of alcohol use disorder and all the headaches and negative consequences that go with it.

Even if you are employed and/or have family or other responsibilities, rehab is still a possibility for you. After detox, you can go to an outpatient program – especially one tailored to your schedule.

You’ll find that living life free from the chains of alcohol is so much sweeter. If you look at before and after photos of those who’ve been through rehab, you’ll see a big difference. Their eyes are clearer, the skin looks healthier, and there is a happy expression on their faces. Some changes are so dramatic you can hardly recognize the person.

That’s just what you can see… what you can’t is a person who has restored relationships with their family, a responsible employee or business owner, a friend that others can count on, and a better state of mental health.

RELATED: Arrested? Addicted to Drugs or Alcohol? Look for Drug Court
What Demi Lovato Teaches Us About Addiction and Recovery
Is Addiction a Disease?