Harsh. Hostile. Volatile. These words only begin to describe the experience of combat veterans. They are in fight-or-flight mode for extended periods of time. They must make decisions that deeply move against religious, moral and value coding. There is no time for grieving, no safe space to process, no place for emotion of any kind.

It’s no wonder some develop PTSD along with an alcohol use disorder in an attempt to self-medicate.

In Iraq, he was able to focus on the job. But at home, he realized he had hurt in ways that could not be fixed.

‘I had put more death and destruction in the world than I could undo,’ he said. Soldiers are told, ‘Now go home back to your life.’ But that doesn’t work, because you’re still carrying something that humans aren’t designed to do.’” – Will H., Iraq combat veteran, in an interview with The Guardian (Singh, 2021)

While there is PTSD among civilians – and, therefore, those entering the military – the rate more than doubles after deployment. Six percent of pre-deployed service members have PTSD, close to the general population’s rate of five percent. Post-deployment, however, that number rises to 13% in service members. (Dworkin et al., 2018)

The military does a great job of turning a civilian into a member of the armed services, but they can fall short when reversing that process.

Truth be told, can you really deprogram someone who has been placed in a war zone? Can you “debrief” enough to allow an easy re-engagement of their prior life?

This is why PTSD, anxiety, and depression are among the most common diagnoses servicemen and servicewomen face after discharging from the military.

Post-traumatic stress disorder (PTSD) can happen to anyone. If you have experienced, witnessed, or have even been indirectly exposed to a traumatic event, you could develop PTSD. Examples of traumatic events that can bring it on are:

This list is not exhaustive, because trauma is unique to the individual. What is traumatic for one person may not be for another, and vice versa. The event is the trigger, but it’s the reaction in the mind and body of those who experience it that defines trauma.

In any given year, an estimated 3.5 percent of U.S. adults have PTSD. Over the course of a lifetime, one in 11 people will face a PTSD diagnosis. (American Psychiatric Association, n.d.)

Do you have PTSD? 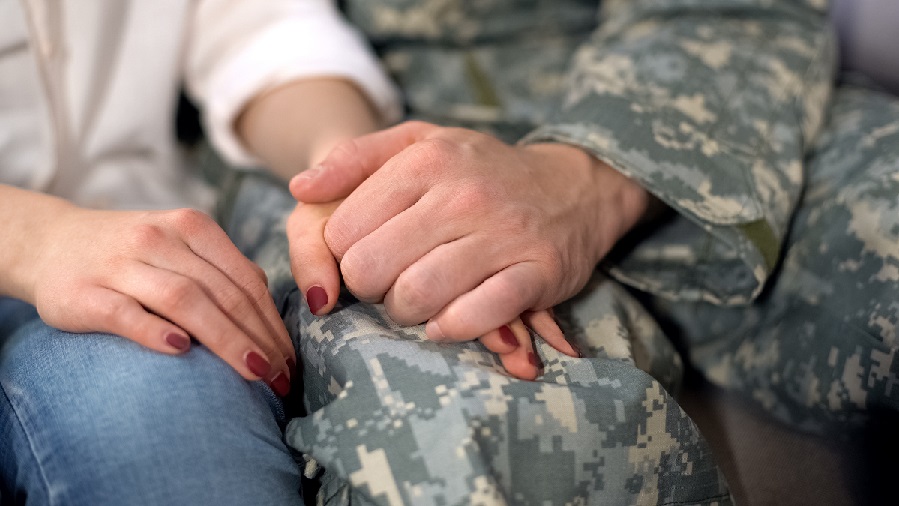 A diagnosis of PTSD is appropriate when symptoms interfere with the ability to function normally in everyday life or cause “significant distress.” They must also continue for longer than a month.

There are four categories of PTSD symptoms:

Many times, PTSD is accompanied by other conditions, including substance use disorder.

The research makes it clear that there is a connection between PTSD and alcoholism and it is evident in the combat veterans population. Studies suggest that the substance use disorder is a (sometimes unconscious) attempt to self-medicate the underlying PTSD – and that veterans may be unaware of this connection. (Dworkin et al., 2018)

The effect of alcohol on PTSD 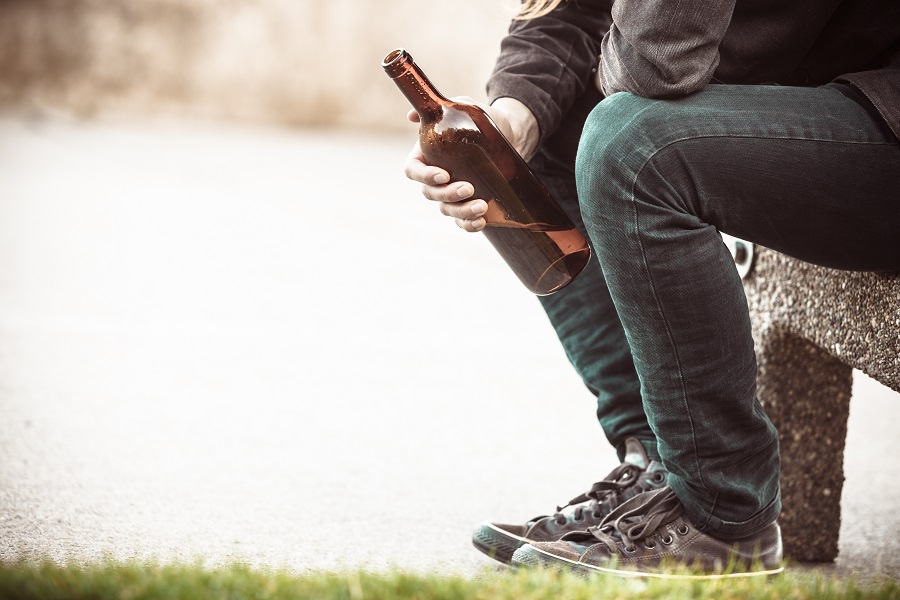 Most people know that alcohol is a depressant. However, in small doses, it has stimulating effects.

Those first few drinks bring on a rush of feel-good chemicals in the brain. Dopamine fuels excitement, lowers your inhibitions, and increases your heart rate. You feel relaxed yet energized, and maybe a little impulsive or aggressive. (Shoemaker, 2020)

The production of endorphins also increases. Endorphins act like opiates on your system, infusing you with euphoria – a sense of pleasure and well-being – and easing pain and anxiety. (Science Daily, 2012)

Interestingly, endorphins are also released while a traumatic event is occurring. It numbs the pain and reduces stress, helping the individual through the experience. However, when the endorphin release halts after the event, the body feels something akin to alcohol withdrawal. This can be why many people with PTSD turn to alcohol, in an effort to replace the endorphins. (PTSD UK, n.d.)

The thing is, when you hit four or five drinks(.08 mg/dl BAC), the depressive effects of alcohol kick in. (Shoemaker, 2020)

Dopamine and endorphin production is halted. Your nervous system, your reaction times, and your cognitive skills slow. Your heart rate and blood pressure decrease, and you may feel sleepy, sad, or be unable to think straight. You may stumble and fall, as motor skills are also affected negatively. (Shoemaker, 2020)

One study suggested that higher amounts of alcohol actually activate brain mechanisms that can bring on anxiety and depression. (Rauscher, 2009)

Alcohol withdrawal can drive further alcohol use, which brings on withdrawal again and the urge to drink again. The user is trapped in a destructive cycle.

Drinking on a regular basis can also lead to an endorphin deficiency, further exacerbating the problem. (Zalewska-Kaszubska et al., 2005)

The more you drink, the more you need to drink as tolerance increases as well. So you may no longer feel the pleasurable effects of those first few drinks. Instead, you are drinking to not feel bad – to stop withdrawal.

Alcohol is a trap that is hard to escape. 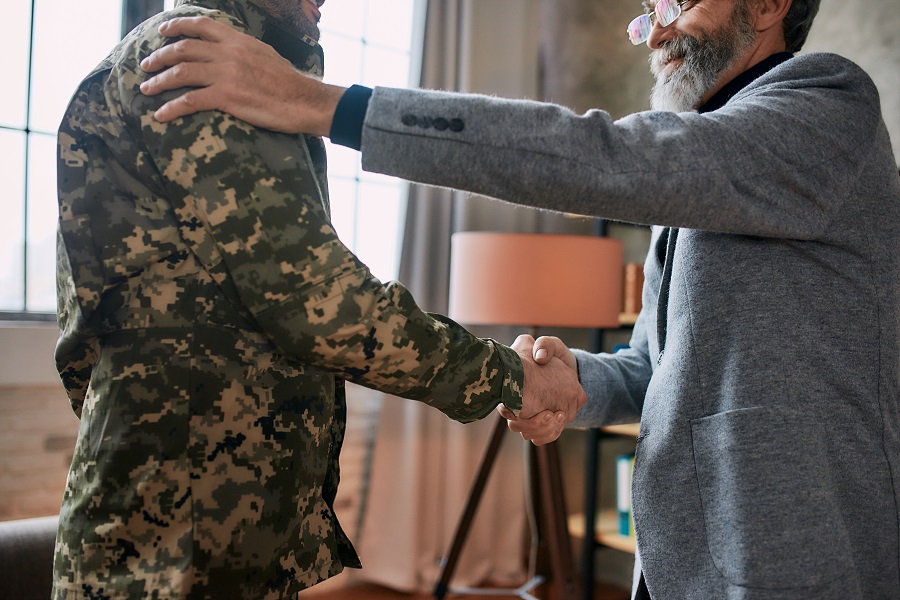 When PTSD and alcohol use disorder are present, treatment is needed. At the same time, new programs and attention have been given to veterans, including the suicide crisis. There is more help available now… so why don’t more service members take part in those programs?

First, individuals entering the military may already have pre-existing barriers to seeking treatment, including age, perspective, previous trauma prior to joining the service, attachment issues, and trust issues. This is in addition to other common issues (such as depression and anxiety) that most individuals would traditionally seek out therapy or care for.

Couple that with combat trauma, sexual trauma, and other experiences faced in the military – along with a perceived negative stigma surrounding PTSD – and it makes sense why service members are hesitant to seek out care.

Let’s just consider grief and loss for a moment – one of many issues returning combat veterans face. Who really has been taught to grieve properly? Most of us aren’t taught how to grieve or are supported in ways truly conducive to the grieving process.

There may be other reasons for their reluctance as well. Leaving the service is a monumental event. Departing servicemembers may feel they are giving up a brotherhood or sisterhood that they have trauma-bonded around. They may feel they are giving up an identity that they probably had as a goal/vision for many years. Now that this “title” has been relinquished, what do they do now?

There is also the issue of reacclimating to your pre-existing family and community. Everyone is initially happy to have you home, but when all the celebration has settled, then what? What do you want to do with the rest of your life? What do you do with all the trauma and combat experience that you have stored away from multiple deployments?

These are just a few of the thoughts or scenarios that our servicemembers face when receiving their discharge papers from the service.

How to Support the Veteran in Your Life 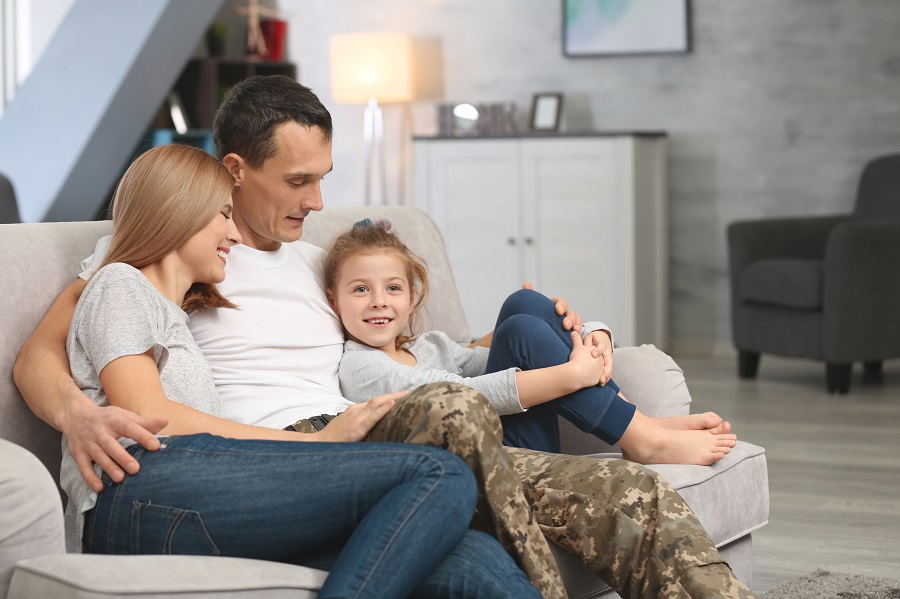 Offering support and being consistent with it is key. Give space, but also (and most importantly) be patient.

It’s not that the veteran you love does not know that there is an issue. It’s about waiting for their constant sense of being in survival mode to be turned off. This must happen to really allow the message that there is a need for help to be received. Help create a space where they know they are not broken; they are simply in need of support and processing.

Once they acknowledge help is needed, encourage the veterans in your life to seek care, either from the VA or from a private treatment center that treats both PTSD and alcohol use disorder. Support them through the process as they walk through it one step at a time. If the VA wait is long and private treatment is not an option, assist with finding local support groups and encourage them to see their primary care physician or psychiatrist for medication assistance to fill the gap until more comprehensive care is available.

Oftentimes, the most common viewpoint presented to a combat vet is that people just don’t understand what they have been though or were asked to do. That is true.

However, that understanding isn’t necessary to support them and help them seek out care. It is something we all can do. Be that safe place to fall and encourage them to get the help they need.

Treatment for PTSD and Alcohol Abuse

Integrated treatment for PTSD and alcohol is preferable for most veterans.

In fact, attempting to address alcohol or drug abuse without addressing the PTSD can leave veterans vulnerable to relapse. (Dworkin et al., 2018)

First, there is detoxification. This is the acute withdrawal stage from alcohol. Since alcohol is one of the most dangerous substances to withdraw from, this is best done in a medical detox facility. It can take anywhere from five to 14 days, maybe more, depending on the amount of alcohol consumed and how long the drinking was occurring.

Second comes the actual treatment for PTSD and alcohol use disorder. This involves uncovering the reasons why these conditions developed and addressing them. Evidence-based treatment, including cognitive behavioral therapy, has been shown to be effective in treating both conditions. (Dworkin et al., 2018)

It’s important to take as long as needed to let recovery take root. The second stage of treatment starts with full-time, intensive treatment of about 40 hours a week. You can either live at home, a sober home, or in the center itself while receiving treatment. Over time, however (usually starting at about 28 to 30 days), treatment hours gradually lessen as you step down into part-time treatment and then to outpatient. As you make that transition, you’ll also begin to rebuild your life on a more solid, healthier footing.

If your leg is broken, you would get it set. If you had high blood pressure, you would take steps to lower it. If you have a substance abuse or mental issue, getting help for it is no different.

It’s not about failure, it’s about success. PTSD and addiction can keep you from having the life and the future you want – don’t let it. Seek treatment. It will give you the tools you need to live your best life.

RELATED: Is Addiction a Disease
9 Common Myths About Drug and Alcohol Addiction
Alcohol Rehab Guide: What are the steps?