Florida-based partial hospitalization and outpatient drug and alcohol rehab facility Foundations Wellness Center conducted a study of its 2019 clients. The study’s purpose was to gain insight into possible factors that affect treatment outcome. Two indicators of treatment outcome were measured: treatment episode completion and readmission within the calendar year (not a rolling 12-month period).

The study analyzed the following aspects of its 2019 client data:

All of the aspects studied were found to have a correlation with successful treatment, as outlined below.

The prevalence of substance use disorder drops with age, yet most people seeking drug and alcohol rehab treatment are 26 and older, according to the 2019 National Survey on Drug Use and Health (NSDUH).

Conversely, those receiving substance use disorder treatment at any location during 2019 were more likely to be older. Of the over four million adults who received substance use treatment in 2019, only 14% were 18 to 25 years old and 86% were 26 or older.

The average age of the 2019 Foundations Wellness client population was 31.8. This is in line with the 2019 NSDUH finding that the vast majority of those receiving treatment for SUD are 26 or older. 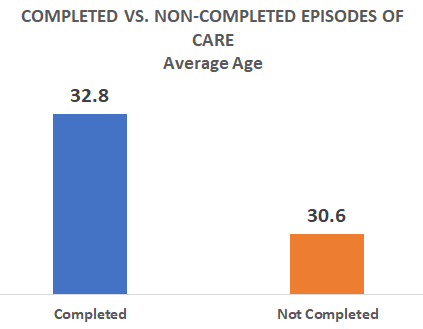 The Foundations Wellness study further found that an older age at admission was correlated with successfully completing treatment, as well as having a single episode of care (versus multiple) within the 2019 calendar year.

Similarly, non-completed episodes of care were associated with a younger age. Those completing their episode of care were on average 2.2 years older (7.2%) than those who did not: 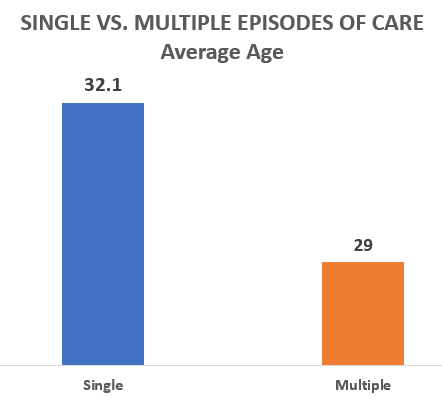 Females Less Likely to Re-Admit Within the Calendar Year; Gender Had No Effect on Treatment Completion

In line with previous studies, the 2019 NSDUH found that substance use disorder disproportionately affects males. Of the 19.3 million U.S. adults with a substance use disorder in the past year, 62.7% were male and 37.3% were female. A similar gender ratio was found at Foundations Wellness Center, with 62.3% males and 37.7% females. 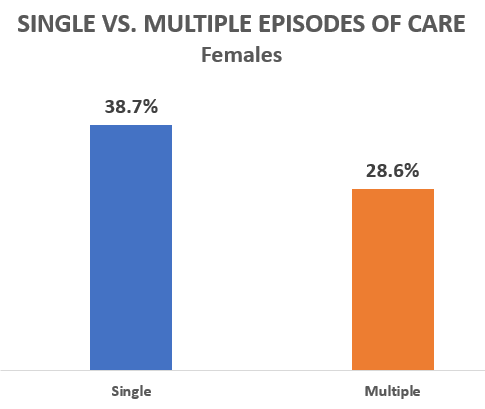 However, the 2019 Foundations Wellness Client Study found that females were less likely to have multiple episodes of care during the 2019 calendar year than males:

When it comes to completing an episode of care, though, there was no significant difference in the proportion of males versus females:

The 2019 NSDUH did not measure the numbers of medication-assisted treatment (MAT) clients. Also, no known studies exist as to the prevalence of MAT treatment among those treated for substance use disorder. Studies have shown that a longer duration of treatment, lower relapse rate (on illicit opioids) and a lower overdose rate among MAT clients.

The 2019 Foundations Wellness Client Study was not longitudinal. Therefore, MAT measurements were limited to: 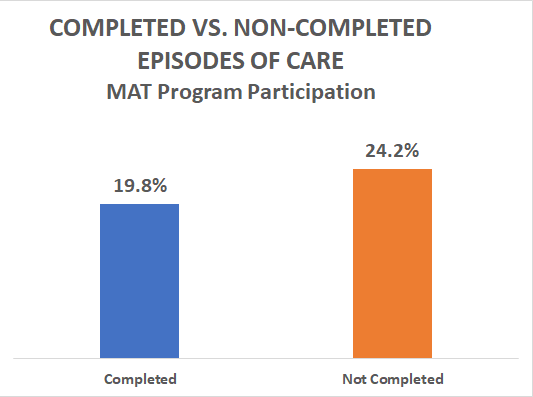 Overall, a solid majority of clients were not on a MAT program:

Surprisingly, however, the use of medication assisted treatment was found to negatively affect the likelihood of completion of an episode of care:

In fact, not using MAT in episodes of care increases the chance of completion by 22.2%. 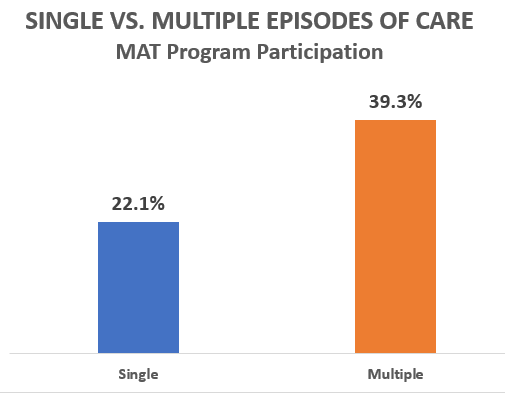 MAT clients were also more likely to have more than one episode of care.

Episodes of care involving MAT also averaged 3.5 fewer days than those that did not:

Having Both a Drug and an Alcohol Use Disorder is Correlated with Lower Treatment Completion Rate, Higher Rate of Readmission 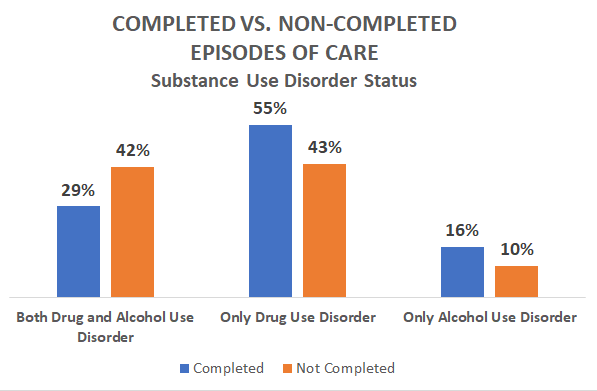 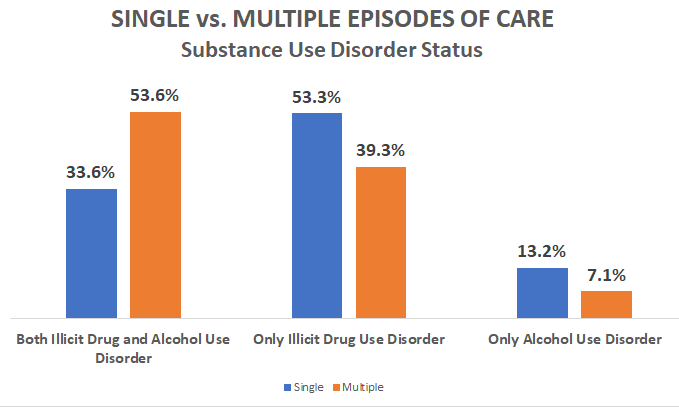 As well, those with both a drug and alcohol disorder were more likely to be readmitted within the 2019 calendar year.

Conversely, those with a single episode of care were less likely to have a both a drug and alcohol use disorder as well as only an illicit drug use disorder:

Higher Rate of Co-Occurring Disorders is Associated with Lower Treatment Completion Rate, Higher Likelihood of Readmission within the Calendar Year

Overall, one in five adults (20.6%, or 51.5 million) currently have a mental condition, according to the 2019 NSDUH. A higher incidence of mental illness can be found in those with substance use disorders. Of the estimated 19.3 million people who had a substance use disorder in the past year, nearly half (49.4%), or 9.5 million individuals, also had a co-occurring disorder.

The 2019 Foundations Wellness client population had a significantly greater incidence of co-occurring disorders than did NSDUH respondents.

Having a co-occurring condition was also associated with a greater likelihood of readmitting within the 2019 calendar year: 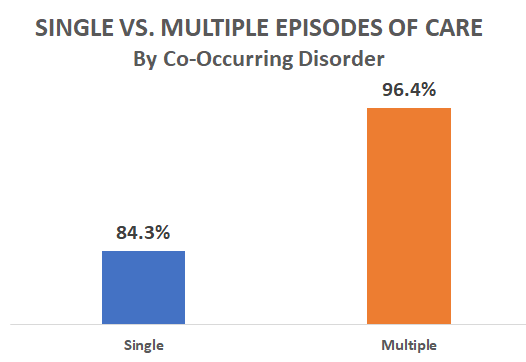 Episodes of care involving an individual with a co-occurring diagnosis were also less likely to complete: 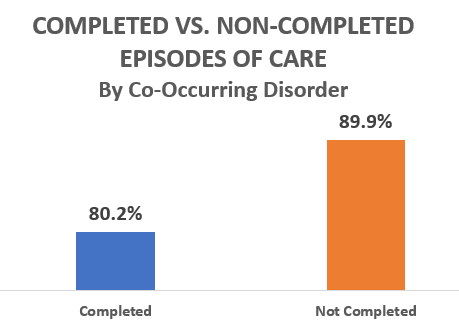 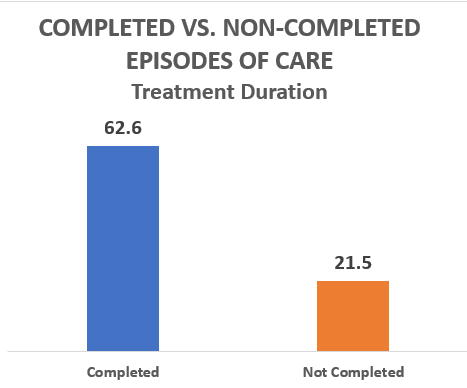 Those re-admitting within the calendar year had a slightly shorter duration of treatment than those that did not: 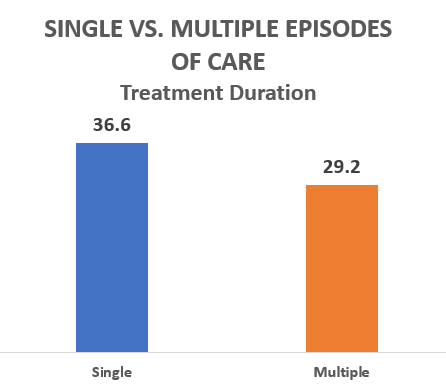